Lynch Cully and Amy Gibbs have returned home, leaving the worst behind them in Southeast Asia. Or did they?

Upon their arrival, past events return to haunt them. New evidence comes to light in Richard Nichols’ murder. A string of mysterious deaths of holistic doctors might be related. An old nemesis “dies” in a car crash, but no body is found. Ghosts emerge from watery graves. And the many-headed hydra known as the Assembly has a renewed target in its crosshairs.

Can Lynch survive to finally get the girl of his dreams? 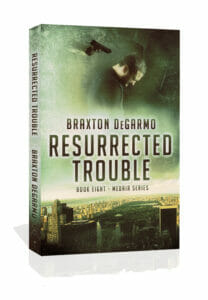 After nearly two months in Cambodia, working on the mission field while the dust settles from the debacle there, Lynch and Amy return home. Their return is intercepted by now-President Bradley Graham who has new evidence regarding the murder of Amy’s ex-fiancé, Richard Nichols. Lynch is commissioned into Homeland Security as a new agent working specifically under the President, and his work uncovers a series of unusual deaths among doctors . . . and a potential tie to the Assembly.

Amy now sees Lynch with “new eyes.” She notes the change in him and foresees a future together. Yet, both are targeted by nemeses from their pasts. They have new hurdles to jump to make that future a reality.

A series of unusual deaths of physicians and naturopaths in 2015 sets the stage for this story. Some of those deaths have been explained. Some have not. However, there is one thing they have in common–those killed were actively involved in simple, natural cures for cancer and autism. How can Big Pharma and the Deep State make money off natural cures? They can’t. Did these people stand in the way of their profits?

Be the first to review “Resurrected Trouble – MedAir #8” Cancel reply