Aric Afton looks forward to college as a time dedicated to learning, meeting new people, and a real social life. But when he speaks up for free speech, he becomes the guy on campus . . . with a woke target on his back.

Ryan Krueger has dedicated his life to protect and serve. When a protest at the Portland Police Bureau headquarters goes bad, Ryan has a choice to make—to lie down and become the scapegoat that the political higher-ups seek . . . or fight to come out on top.

Dillon Ingersoll is no stranger to war, thanks to a tour as a Marine in Iraq. The only souvenirs of that time were nightmares and PTSD . . . until he accepted Christ as his Lord, Savior, and Healer. But his beloved Texas, with his ranch bordering the Rio Grande, has become just another steppingstone for the cartels bringing their deadly wares into the country, and the nightmares have returned.

Three lives. Three stories. And ‘white hat’ hacker Adam Afton, with his UltraNet software, becomes the common thread as the earth shakes with the coming change in the U.S. government and the Great Reset of the Deep State. 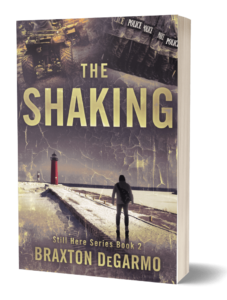 Three stories . . . and Adam Afton is the common link.

Aric Afton looks forward to college, having been enticed to pursue criminal forensics by his friend and mentor, Lynch Cully. Yet, naively he expected campus to be a place of free speech, open ideas, and honest debate, not a “woke” indoctrination camp. When he speaks up for free speech at a rally seeking to “cancel” Professor Cully for his ties to the previous president, he becomes marked as the guy . . . and the LGBTQI+ and BLM crowds move to make his life miserable.

Ryan Krueger has always wanted to be a policeman and openings in the Portland, OR, Police Bureau lured him to move his family across country. He’s toughed it out and endured the worst of the Portland riots, serving as he was taught to do–with integrity and hard work. However, when a protest goes bad, and a protester trying to light the Police Bureau headquarters on fire gets killed, he becomes the scapegoat . . . an unwilling sacrifice of the “defund the police” political crowd.

Dillon Ingersoll served his country in a different way, as a Marine. That was the past. Today, from his ranch along the Rio Grande, he witnesses the southern border crisis on a daily basis and, with his family, watched a favored nephew succumb to the drugs brought over the border by the cartels. He feels his country has let him down by not securing the border. So, when an opportunity to honor his pledge to protect the country comes up, he steps up, but that effort doesn’t quite work out as expected.

The issues are those we read about in the news almost daily: schools indoctrinating and grooming children for the LGBTQI+ “lifestyles,” progressive DAs and judges failing to prosecute criminal actions and releasing those people onto the streets to repeat their crimes, the government’s failure to stop the flood of both drugs and people across our borders, and more. Never in our nation’s history has there been such division among the people or the unwillingness to accept free speech and honest debate of the issues.

The Bible puts it this way:

“For people will be lovers of self, lovers of money, proud, arrogant, abusive, disobedient to their parents, ungrateful, unholy, heartless, unappeasable, slanderous, without self-control, brutal, not loving good, treacherous, reckless, swollen with conceit, lovers of pleasure rather than lovers of God, having the appearance of godliness, but denying its power. Avoid such people.” 2 Timothy 3:2-5 (ESV)