Someone is attacking young legal assistants and leaving them behind in a vegetative state, unable to communicate but still alive. Besides common physical traits, the only marker of this perp’s M.O. is a single venipuncture site where blood has been taken. But why? And who?

Now two prominent attorneys are dead. Is there a common link?

Looks that Deceive is a medical/police thriller involving the hunt for this assailant, as the pressure mounts for Det. Lynch Cully to find and stop the perpetrator.

Now FREE as an eBook —

I’m now offering book #1 of my series as a free eBook to those looking to try one of my books. Why? Because I’m convinced you’ll enjoy it and want more, of course. To get the free copy, please use the opt-in fields near the bottom of this page to enter your email address and name. 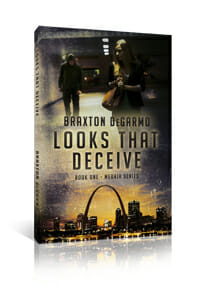 Detective Lynch Cully faces the toughest case of his career.  A serial assailant—dubbed the L.A. Rapist—is leaving young Legal Assistants in a vegetative state. Now, the deaths of two prominent medical malpractice attorneys have put authorities in an uproar. Are these cases related? Has the L.A. Rapist upped his game? The pressure on Cully grows with each day this assailant remains free. Yet, how does he find someone who seems to stay one step ahead of his every move?

Amy Gibbs, RN is a newly recruited med-evac flight nurse who left the E.D. and its stress behind, along with memories of a certain detective who dumped her. On one fateful call, she hears the deathbed confession of a man whom police are seeking as a person of interest. Within hours, the lives of Amy Gibbs and Lynch Cully again intertwine in a story that unravels a web of identity theft, electronic eavesdropping, and stalking amid a confusion of identities.

Sgt. Lynch Cully is under extreme pressure to find the perpetrators. Has he been thrown into a case that might be his last … with an ex-girlfriend he regrets leaving?

In this story I, again, pick up the theme of technology in the wrong hands. Woven into the story are issues of cyberstalking, identity theft, and technology that can be used the wrong way for the wrong purpose.

Author’s Note: When I first wrote this story, I titled it Identity, and it encompassed more about identity disorders. But somewhere in the editing process it became evident that it needed to be more of the detective’s story. In fact, my editor asked me to flip the emphasis from Amy Gibbs to Lynch Cully. It wasn’t easy taking a completed story and flipping the main characters’ roles—Lynch’s role went from 40% to 60% of their story line, while Amy was reduced to 40%. But I learned a lot in that editing process, and I hope it shows in my later books.

1 review for Looks that Deceive – MedAir #1