Slavery has been around since ancient times, but in today’s world, it hides underground, away from scrutiny and the disapproval of society. Young women, even young boys, often fall into its clutches to become unpaid servants or, worse, prostitutes kept chained to their ‘owners’ by drugs and fear. This story, Rescued and Remembered, book number 2 of my MedAir Series, tells the story of one small group risking all to take down one highly organized trafficking ring. 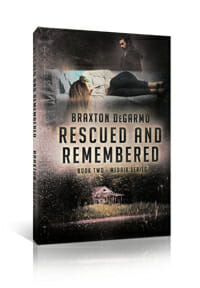 Fished from the river, nearly dead, Jusef has lost his memory, can barely walk, and needs assistance simply to feed himself. His benefactor, Danijela, lives in fear in the remote river cabin owned by Ibrahim, whom she believes to be dead. His killer has put a price on her head, too, and hunts her. Has her time come to face him? Will she, and others like her, be rescued and remembered?
For Amy Gibbs, RN, the last three months have been equally difficult. Suffering from Post-Traumatic Stress Disorder, she has been battling the emotional demons of losing her “on-again” boyfriend, Lynch Cully, to the same monster who twice attacked and nearly killed her three months earlier. Yet, enter Richard Nichols, an Army vet recently returned from Afghanistan. His charm and confidence entice her, but is it an act? Is he who he says he is?
In a series of twists and turns of events, the four become embroiled in the “industry” of human trafficking. The results will affect not just their lives, but those of dozens of women caught up in the horrors of this modern-day slave trade. Like Danijela, these women are “undocumented aliens” brought to the U.S. under the promise of jobs and an education, only to be forced into slave labor and prostitution. Human trafficking is like the many-headed Hydra of Greek mythology, but it just might lose a head this time.

Human trafficking in the U.S. While sex is the major component of human trafficking, undocumented laborers is another major part of the problem. The numbers of people being trafficked can only be estimated, but those estimates would astound people who think it doesn’t happen in their neighborhood or town.

Author’s Note: Slavery has been around for a long, long time, and many people believe we, as a society, have matured to a point where such a thing is a minor issue in this country. And yet, it’s a multi-billion dollar industry in the U.S. and the Super Bowl is the leading event for sex trafficking each year. The numbers show that we’re far from having matured past the point of slavery. And, worst of all, it’s typically just winked at by the elites in government. Many of them are involved.

Why did I choose to use Christian characters? To be honest, I’ve grown tired of the stereotypical ‘Christian’ character who is shown as bigoted, hateful, and greedy, as in the slick, over-the-top televangelist. Sure there are some legalistic folks out there calling themselves Christian, but most of the believers I know are honest, down-to-earth, hard-working people who go out of their way to help others. The legalists might be surprised come Judgment Day. The latter will be rewarded. In this story, I’ve attempted to show the type of Christians I know.

1 review for Rescued and Remembered – MedAir #2