A car thief and more …

Make that two, after they become targets for an apparent vigilante.

Det. Seamus O’Connor is assigned to a joint task force to assist with the investigation of a serial bomber with a unique MO.  But as O’Connor begins to close in, the hunter becomes the prey. 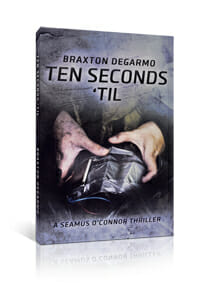 Sgt. Seamus O’Connor has faced more than his share of despicable people as he strives to keep the people of St. Louis safe and solve some of their most complex criminal cases. More than once he’s been called up to the Major Case Squad or a joint federal task force. So, when the call comes in that he’s been assigned to joint task force with the FBI and St. Louis Regional Bomb & Arson Unit, it doesn’t strike him as unusual . . . until the realization hits him that they might be dealing with a vigilante, someone who many people see as doing the community a service the police can’t accomplish.

Even worse, this person is most likely not a career criminal. He’s clearly “removing” contemptible bad guys that the courts failed to put away. And yet, there’s no doubt he’s crossed the line with his means of doing so.

The power of self-preservation can never be underestimated. When Seamus begins to close in, he finds himself becoming a target, too. Who’s going to win?

Author’s Note: This story was first written as my contribution to a multi-author collection in 2017, released in the eBook format. This is why it’s shorter, a novella, rather the usual length of my books. The collection ran for a limited time, upon the end of which I republished the story on its own.

Be the first to review “Ten Seconds ’til …” Cancel reply