Will the people elect the status quo?

Or is a major presidential upset in the wind?

The election is days away and tensions are running high. The armed takeover of a remote Oregon wildlife refuge takes center stage in the news, and candidate Bradley Graham goes to meet with the protesters . . . against advice. When Graham is kidnapped, Lynch Cully, the urban ex-detective, finds himself in unfamiliar territory. Can he hold his own where there are no streets, no city lights, no backup?

Meanwhile, life takes an unexpected turn for Amy Gibbs, RN, and her fiancé Richard Nichols. Working in Washington, D.C., he is offered the real estate deal of a lifetime . . . if he ignores the suicide that took place in the house. Or was it? Still in St. Louis, Amy’s curiosity foils a major terrorist plot, saving thousands of lives . . . at the sacrifice of one. 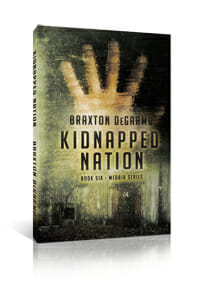 Everyone expects to see our first female president elected. It’s a given to some. To others, it would confirm in their minds that the Deep State has rigged the vote, again.

But candidate Bradley Graham has faith that an upset is in the wind, and his confidence is contagious throughout his campaign. He holds firm in his belief that God alone ordains our leaders, not The Assembly, as the “Deep State” is known to him. He has survived their wrath before.

Graham’s campaign is based on his pledge that he will be a President of the people, elected by the people and for the people. So, when an armed protest over land and water rights takes over a federal refuge, he goes there “for the people.” His advisers say “Don’t go.” His Secret Service detail says “No way!” Even Lynch Cully, his personal security chief, questions the wisdom of this move, but what the boss wants, the boss gets.

When his boss disappears, Lynch faces new challenges. Not only must he find Bradley Graham, but he has to clearly show who was behind the kidnapping. The media is already blaming the protesters, who deny their involvement. And worse, Lynch is in unfamiliar territory, the remote wilderness of Steens Mountain, Oregon.

Meanwhile, at home, Amy Gibbs’ life is in turmoil. Her fiancé, Richard Nichols, lives and works in Washington, DC while she remains in St. Louis, where she wrestles with the decision about moving east. Her decision to surprise him for a weekend backfires. The surprise is on her, and she flees home to the comfort of familiar surroundings. But something sinister is going on at one of her old haunts and she stumbles upon it–a serendipitous event that she comes to regret more than anything in her life.

Most folks in the Midwest and east of the Mississippi River have no clue how much land the federal government owns in the western states. In a number of states, the feds own close to 60% of the land in that state, most of it claimed for mineral rights for which the elites can dole out licenses to their cronies. When minerals or oil is discovered on private land, the government, via the Bureau of Land Management, sets its sights on claiming that land and often stops at nothing to get it. Just such an incident led to the takeover of the Malheur National Wildlife Refuge in January 2016 by armed protesters seeking a national spotlight on this overreach of government. This story uses that protest as its premise.

Author’s Note: Most media stories on this protest point to the protesters as the bad guys, frequently calling them ‘armed militants.’ It was a great story premise and sheds some light on yet one more area of government corruption. A 1-star review of this book, calling it ‘alt-right’ propaganda led to my being shadow-banned on Amazon. Of note, however, is that all 27 people arrested for the protest were acquitted in court, showing one more disconnect between mainstream reporting and reality.

Be the first to review “Kidnapped Nation – MedAir #6” Cancel reply