Has the American Federal Government become too corrupt, too powerful, too large and too invasive of our privacy? Could a secret organization control the media and big business? What if that was all part of a global plan? Whom could you trust? And what might happen if a new political party succeeds like none before it to challenge the “Establishment?” It’s time to “Take Back America!” in this political thriller. 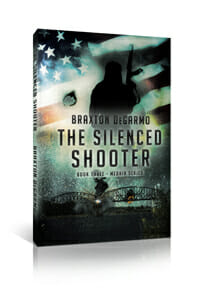 Tired of federal gridlock? Do you trust the federal government anymore? Does it seem to you that the “elites” in Washington have an agenda that doesn’t exactly fall in line with the best interests of the country? Is it time to “Take Back America?”
Picking up where Rescued and Remembered left off … Lynch Cully has found that recovering his memory might be the easy part of “coming back from the dead.” His job is gone. His relationship with Amy Gibbs is on the rocks and the status of Danijela is smeared by a huge question mark. As he recovers from his wound, anxious to leave the hospital, an old friend, Sgt. Seamus O’Connor, picks up the slack on the Major Case Squad in response to a 9-1-1 Code 1000 call – all available units respond – to a shooting at a private Christian school. Automatic gunfire reported.
Meanwhile, Bradley Graham, the keynote speaker at the American Patriot Conservative Caucus, has sent a shockwave through the political “circus” in this country. In announcing the successful formation of a new political party, the American Party, and its record number of both grass roots membership and fund raising, he has challenged the mainstream political world unlike the Libertarians or any other group before it. In doing so, he might just as well have tattooed a target on his forehead.
Has God finally turned His back on America? To the point where He would allow a shooting to occur in a Christian school, a school dedicated to his Glory? Or, will the boldness of the American Party begin to re-chart the course of society back toward those God-given rights that so many Americans have fought and died to preserve? Perhaps more than a few guardian angels are working overtime.

Are conspiracy theories just that? Or are they labeled such to lessen their credibility? The idea of a Deep State running our country, or even the world, is often mocked, particularly by the mainstream media. And yet, does the media actually present us with factual news, or is it controlled by the Deep State?

Author’s Note:  What started as a fictional look at conspiracy theory led to a story that could be all too real. I was intrigued with the idea of what might happen if a true conservative running as a third-party candidate for president actually gave the Republicans and Democrats a real run for the money. What if people were fed up enough with the two-party system to abandon it? Written from a conservative perspective, this story is likely to ruffle the feathers of liberals. And yet, when I delved into the idea of a Deep State controlling the news, I found the GameChangers Salon, an organization of 1,100 ‘journalists’ who control the news cycle and what stories are reported. Also of note, I wrote this book in 2013, long before the rise of Donald Trump. It’s been interesting to follow the media’s treatment of him, in light of what I discovered in writing this book.